Just because we live at Camp for a month and a half every summer it doesn't mean Tillie has to give up on the cute outfits for that time.  While she does wear a lot of garage sale clothes while we're there, I can't help but sew a few cute things for her. 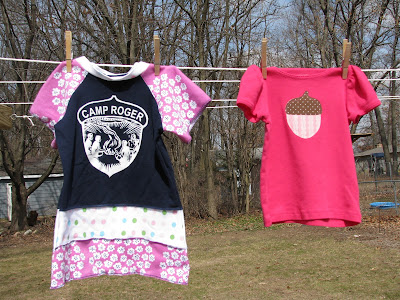 First off, I don't know if you realize how excited I am that I can take pictures outside again.  Things just look so much better outside and cuter on my clothesline.

I've been thinking about making her a dress using a Camp shirt since last fall.  This spring I finally decided to go for it using Little Blue Boo's Sienna dress pattern.  All I have left to do is the top-stitching around the neckline, but I decided to try it on Tillie first.  Good thing I did, the neck hole is too small!  I'm going to have to modify the back adding a keyhole button closure, but I haven't quite decided how I want to do it yet. 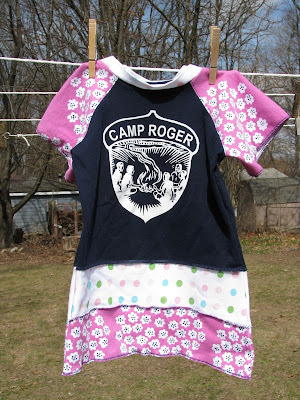 Of course, she needed another acorn applique tee this summer.  I tried to whip this one up two weeks ago when we went to Camp for dinner.  Yeah, not a good plan.  As I was sewing it on, I realized I was sewing very badly so I decided to to take the stitches out and try again.  After I took them all out, I discovered that the acorn was not centered at all, so I peeled the acorn off.  That, of course, left a residue so I needed to enlarge the acorn so that it covered the marks left.  This acorn is 115% bigger than the original.  I intended to use one that was 127% bigger, but that was another mistake.  I didn't sew this one very well either, but I kind of just wanted it to be done.  It doesn't totally cover the residue, but it's not super-noticeable. 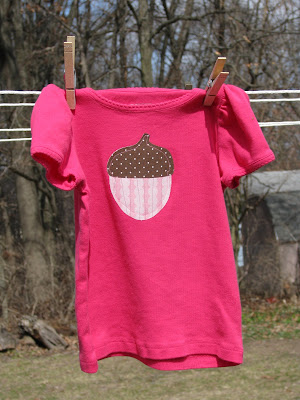 both look cute! can't see any mistakes on the pink one. It's nice to hear about Camp Roger through you. One of my FAVORITE places! I think sewing is your craving this pregnancy ;)